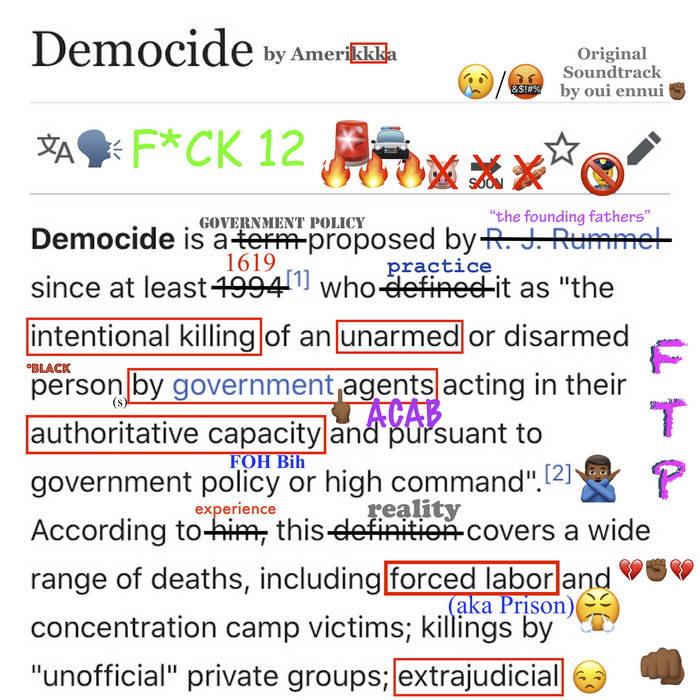 mimichavon Thank you for your energy and spirit on this album! For sharing your thoughts with us! I needed this!

This is an album I neither wanted to write nor release, and yet I feel/felt compelled to do both. I hated making it. But I was/am both full and empty, so here we are. I'm so beyond drained. I am a husk. This ain't nothing new. Though this particular expression is inspired by my personal experience, it isn't about (only) me. This has been my (our) reality for the duration. THE DURATION. And no one cared until there was a global pandemic. Ain't that about a bitch. Then again, I expect nothing less and nothing more.

The Rodney King "incident" happened in 1991. Let that sink in. They've been beating and killing us ON VIDEO for *at least* 29 YEARS. With IMPUNITY. It is systemic WHITE SUPREMACY that has allowed and continues to allow these "people" to be acquitted by a jury of their "peers" IF they're ever even prosecuted, which historically most ARE NOT. I mean, there's video of beatings from the civil rights era and photos of lynchings going back to THE 1800s. AND NOW Y'ALL SEE??? NOW y'all care?!? We've been screaming, pleading, begging, and beseeching since 1619. And we've been met with SILENCE. Or tone policing. "It's not the right time." "It's not the right place." "This isn't the right way." It never is though, is it?

I watched pigs pin and cuff my brother while my mother screamed when I was about 9. His crime? Hopping a turnstile at a grocery store. I got beat by pigs for the first time walking home from school. I was 14. My crime? Being a 14 year old (Black) boy and tickling my (white female) classmate. Knocked out cold from behind and awoke to a grown man's knee between my shoulder blades. I literally gasped "I can't breathe." At 25, because I "fit the description" I had a SWAT team member stick an assault rifle in my mouth and tell me to "give him a reason”, while all his boys laughed. I tried to look it up later that night. I think was a Heckler & Koch MP5. Google that and imagine TASTING IT. There's not enough room on this page and frankly not enough gas in my emotional tank to list every other act of outright aggression I've faced, and I grew up middle class. Then there are the micro aggressions. In my workplace, if I'm quiet, then I'm intimidating, scary, and make others "uncomfortable." If I'm vocal, I'm aggressive, scary, and make others "uncomfortable."

And I’m finna keep it 💯 as always: I am not with the shits. The performative allyship. Black squares for one day, then back to stat-quo. The "inspiring" photos of pigs kneeling and hugging protestors just to turn around and gas them. THIS IS NOT A KUMBAYA. THIS IS NOT HANDS ACROSS AMERIKKKA. "We" are NOT in this "together." "We" didn't create this 400 year clusterfuck. Only some of "us" can decide to go on about our lives after this inevitably stops trending. WE WANT CHANGE YESTERDAY. WE ARE OUT OF PATIENCE. And honestly, if you ARE finally doing something, I don’t "applaud" you. You shoulda been doing it. You want a cookie? Imagine a doctor who’s had THOUSANDS of patients die of sepsis (blood poisoning) because they'd neglected to sterilize their instruments. They weren't sterilized because they didn't have time. They weren't sterilized because that doesn't affect the surgeon; it only affects those unknowingly upon their deathbed. How were those ever acceptable excuses? NOW they SAY they're GOING to run a clean ship because they’ve been exposed. Would you applaud them? Would you let them continue to practice medicine?!?! All those patients died painfully. They’re gonna stay dead too. You’d sue them for malpractice civilly and likely pursue criminal charges. But fuck that metaphor: Are you doing it "for the gram" so you can sleep better? Are you now absolved of your culpability? Don't talk about it, be about it. And don't ask US how to fix it. YOU broke it. YOU fix it. And if you think I'm talking to or about you: I probably am. ¯\_(ツ)_/¯

So anyway, what is this? An aural alternate reality. A horror film called "Life As A Black (Wo)Man" DEMOCIDE. A soundtrack to murder. A score to the disposability of BLACK BODIES. My last album, Sirius Bismuth, was meant to be a form of ESCAPISM. After the physical and mental toll Covid-19 took (and is still taking) on me, I wanted to make something as a distraction and a joy. I did and I was overwhelmed and humbled by the response and support. This ain’t that. What’s the opposite of escape? Capture. This is meant to be CAPTURISM. My attempt to soundtrack what it’s like for me and millions of people who look like me to even SEE a cop. The anguish and anxiety associated with the murder porn and oppression snuff films we're inundated with online.The undiagnosed PTSD we're collectively suffering from. The physical feelings that I experience when *overseers* are near. What goes through my mind when I think I might get pulled over. How I think about my mother when they’re simply behind me. The feeling that you’ll be CAPTURED & KILLED for SPORT. A simulation no one would opt-in to, but one that my people cannot opt-out of. Not in this life anyway. Too real? Try living it. 😘